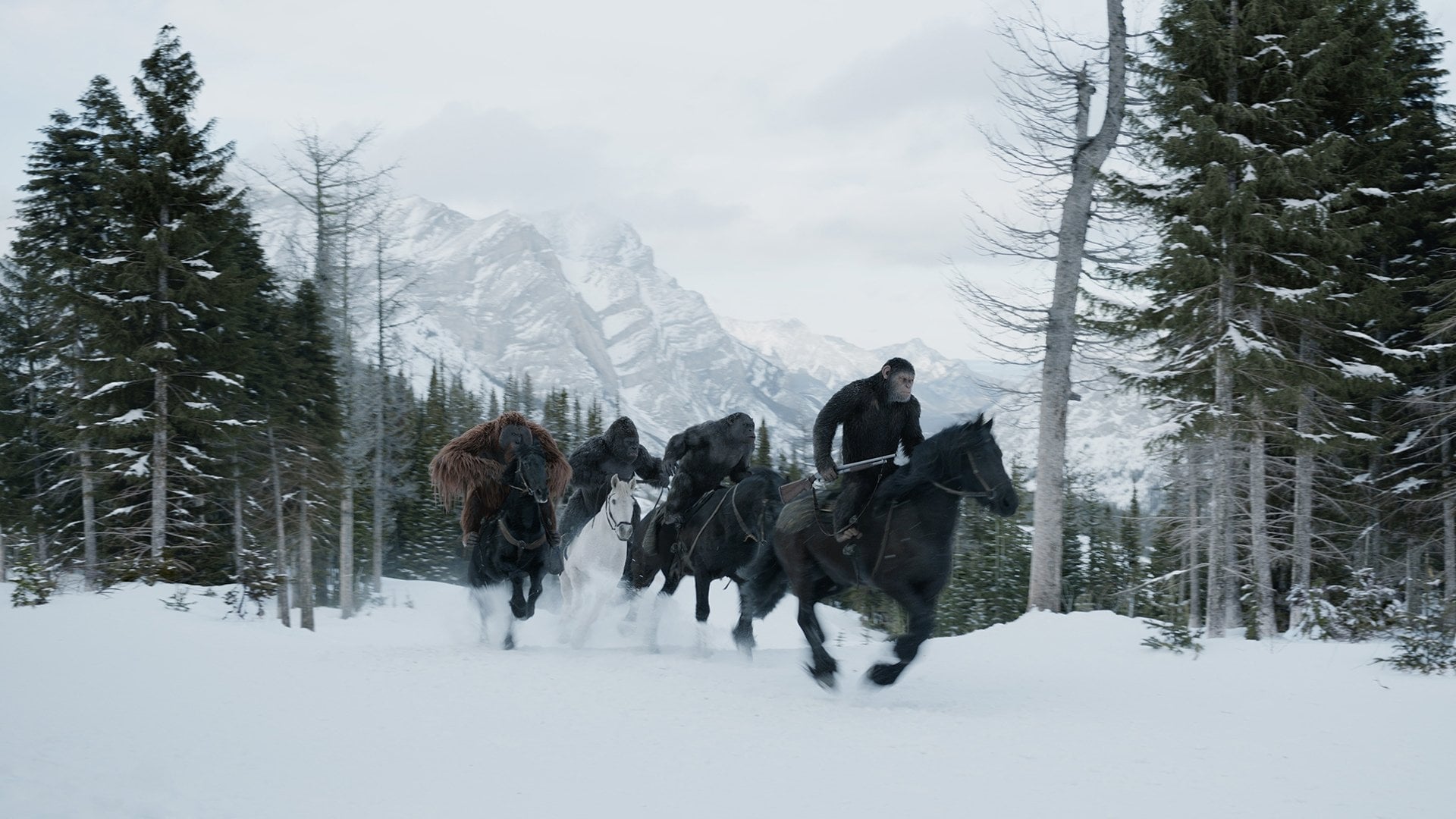 War for the Planet of the Apes

After the events from Planet of the Apes: Revolution , the world is divided into two camps. The circulating virus has decimated humanity and the remaining military are fighting for the supremacy of the chaotic planet. Caesar ( Andy Serkis ), the leader of the monkeys, fights for the future of his family and friends who are hiding in the deep forest. When the hiding place is found due to treason, the next bloodbath is not long in coming. In a war in which there are no winners, only survivors, Caesar sees his only salvation on the offensive. While the bereaved are supposed to get to safety, he wants to put an end to it all. He goes looking for the Colonel ( Woody Harrelson), who led the nocturnal attack and embodied what is probably the last resistance to a peaceful existence. He is always one step ahead of him, intercepts the rest of the clan and shortly afterwards, Caesar, who has fulfilled vengeance, falls into his trap. The situation seems hopeless, but in times of need it is not just the courage of the individual that counts, but the will of all. An all-important uprising of the enslaved monkeys breaks out.

The ninth film in the franchise and the third in the reboot suggests that talking monkeys will never go out of style – see the greats of current world politics. Jokes aside, because with Planet of the War for the Planet of the Apes, Caesar’s journey is coming to an end. From the laboratory, to the zoo, to freedom, to war. Always there, Andy Serkis ( The Avengers 2: Age of Ultron ), who is barely recognizable on screen, but can be felt in every movement of the monkey leader. His roles as Gollum ( The Lord of the Rings and The Hobbit ), Kong ( King Kong ) and Snoke ( Star Wars: Episode VII – The Force Awakens)) earned him global recognition. He is the undisputed primate whisperer of Hollywood who seems more comfortable on four legs than on two. The development of Caesar within the three parts is all the more decisive. From child to leader to martyr. While his personal development is clearly in focus in Planet of the Apes: Prevolution (2011), in Planet of the Apes: Revolution (2014) the focus returns to the actual plot and the fight with humans. The reason for this could be the departure of director Rupert Wyatt ( The Gambler ), who after the first film took the reins to Matt Reeves ( Cloverfield) handed over. He immediately turned the action control of the second part up a few decibels and for the latest part to the stop.

The adrenaline-soaked all-round blow of homeless monkeys and broken people in a post-apocalyptic world quickly sets the course for confrontation. The monkeys want to be left alone, as always, people want to make it clear once and for all who is at the top of the food chain. It is interesting that Caesar seeks revenge after the attack on his family. If he is normally the decisive voice of reason, who meets the emotional outbursts of his fellow species with understanding, this time it is he who wants to obey his pain. This anger makes him untypically blind and susceptible to subsequent arguments with the Colonel and his army, but gives his followers the chance to turn the tide and extend their helping hand to the otherwise rational-thinking leader.

Caesar is still the charismatic front man of the monkey troupe, who this time has to split his screen time. Instead of the one-man show, there are many different characters that appear more or less imposing. Among them old friends like the good-natured orangutan Maurice ( Karin Konoval ), the loyal Rocket ( Terry Notary ) and the selfless gorilla Luca ( Michael Adamthwaite ) and new friends like the mute Nova ( Amiah Miller ) and the kid’s head Bad Ape ( Steve Zahn). The latter in particular is developing into a double-edged sword, which is supposed to cut through the tense atmosphere and make for a laugh or two, but often seems out of place. In general, one feels that the film wants to please everyone and that it makes use of successful greats.